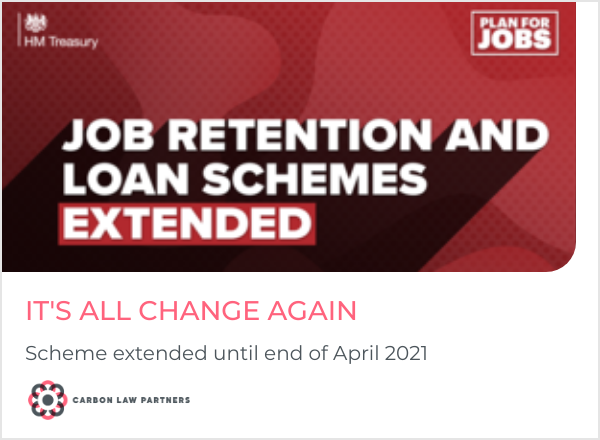 Following  pressure from business and employee groups, the government has today announced a further extension to the furlough scheme.  The scheme will now be in place until 30 April 2021.

When the government announced (at the last moment) that the scheme would continue until the end of March 2021, they also stated that a review would be undertaken in January 2021 as to the level of contributions by employers.  It was (at that time) widely anticipated that we would see a similar level of employer contributions to be required in February 2021 and March 2021 in the run down of the scheme as we had seen previously.

However, in today's announcement, the government has stated that they will continue to pay the full 80% of wages (capped at £2,500 gross pm) until the new end date of 30 April 2021.  There will no longer be a review of the scheme in January 2021.

The timing of the announcement has been made to tie in with the anticipated commencement of many 45-day collective consultations that would have been required to start now in order to ensure that redundancies could be made by the end of January 2021 (when the anticipated period of 'non-contributory' furlough would end).

Of course, despite this, furlough is not 'free of charge' to employers.  Throughout the scheme employers will continue to incur NICs and pension costs as well as the accrual of holiday.  For those companies who are in the middle of redundancy processes they will need to consider whether it is reasonable to continue to incur these costs for such an extended period of time, particularly if the redundancies are not directly affected or caused by the pandemic.

This latest announcement is clearly intended to reflect the worsening situation during the winter months and the heavy restrictions that are being placed on people and the economy through the various tiers or restrictions.

The detailed announcement from the government can be accessed here.

Extending the CJRS until the end of April gives businesses certainty well ahead of the 45 day redundancy notice period, with Budget setting out the next phase of support more than 45 days before the new end date of the scheme. 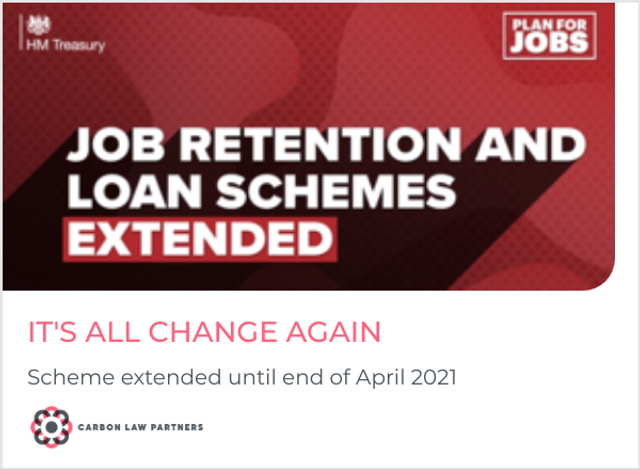