Non-compete clauses: they don’t really set the world on fire, do they? We often include them in employment contracts and then forget about them until an ex-employee goes to work for a competitor or starts a new business.  Then there is a frantic search for the employment contract to see whether we can stop him.

They may be overlooked, but they are a useful way of protecting your business and, if nothing else, they have a useful deterrent effect. Often, just a warning letter from a solicitor, pointing out that the ex-employee is in breach of the restrictive covenant, is enough to make him think again about his career choices. No-one wants to end up in an expensive High Court battle.

So, employers and employees will  be interested to know that The Department for Business, Energy and Industrial Strategy is consulting on measures to reform non- compete restrictive covenants. It is considering two things:

Non-compete clauses are used less frequently than other restrictive covenants, such as non-dealing and non-solicitation clauses, often because they are seen as more onerous and so difficult to enforce. However, I still can’t see them being banned altogether. Large organisations, especially in the IT and pharmaceutical sectors, are likely to oppose this as part of the consultation process.

Compensating an employee on the other hand, may be the way forward. Several countries, such as Germany and France, already require mandatory compensation for non-compete clauses. 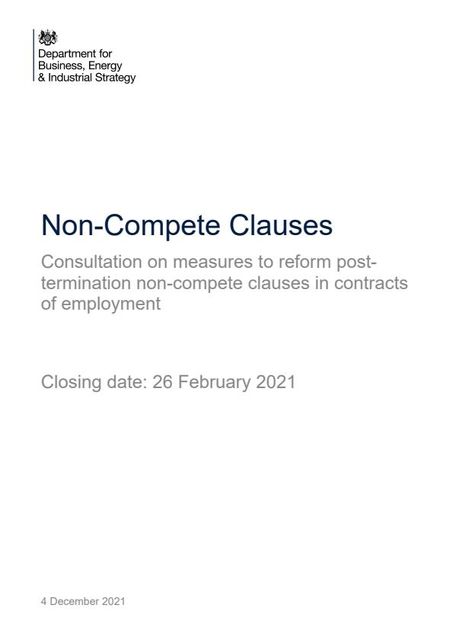